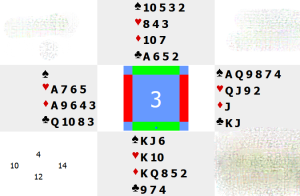 Contract three-off for East/West 1000. Heavy spade suit holding by East now obvious. Questioned as to why there had been no alert for the double, says ” It was for take-out and I was looking for the best contract our way.”