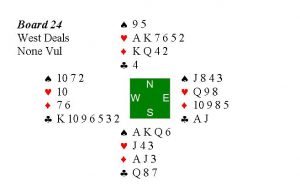 During the auction the bidding became confusing at one point but the non-offending pair were not damaged as a consequence.

3 (a) Wishing to press on with a slam enquiry anyway, S bid 4NT (RKCB). Although N wanted to sign off in 4♥, it made no difference whether S interpreted N’s bid as (i) a sign off, or (ii) 1 key card. Either way, with such a strong hand, S was determined to press on. Since his previous bid had been read as a splinter, 4NT was used to clarify the situation to everybody.

(b) To correct the misinformation she had given previously N then advised EW that “the 4♣ bid by S had clearly not been a splinter”, and accordingly N bid 5♥ (2 key cards). N went out of her way to try to clarify the situation which arose from the mis-information which she had given due to a misunderstanding of the 4♣ bid from S.

4 Missing only one key card in partnership and with a strong point count, S took a calculated risk and raised to 6♥. Careful play by North resulted in making a small slam.

There is not a shred of evidence that EW were in any way damaged by the error during the auction. Quite the contrary: in fact they gained authorised information that S did not have either 1st or 2nd round control in clubs.

N inadvertantly gave mis-information but EW were not damaged in the slightest (they had very few points and didn’t bid at all), but NS had their slam cancelled. In fact EW gained slightly from N’s subsequent clarification of her interpretation of the 4♣ bid from S, because EW would then know that S didn’t hold first or second round control in clubs. Such information would have been unavailable to them without N’s clarification. We believe that the NS slam should be allowed without adjustment.