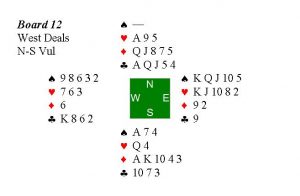 1 Announced by South as better minor.

2 (a) Alerted by West
(b) Meaning queried by South (since it could be CRO, Michaels or natural)
(c) West said the bid was natural
(d) South asked “Clubs?”
(e) West nodded.

3 North reasoned that having been advised by West that East held clubs, it is reasonable to conclude that this must include the King, since North held three of the top four honours. She further reasoned that a club finesse would therefore fail. For this reason she signed off in 5♦. If North had known that in reality East held both majors, then given her void in spades plus A♥, cover in clubs, and a partnership holding in diamonds then she would obviously have bid 6♦

On returning home that night we saw that 7/8 pairs had made 12 or 13 tricks in diamonds, including ourselves, and 3/8 did bid a slam. Clearly a slam was there for the taking and if North had not been misled by misinformation from West, then North would have bid it for the reasons stated above.

We were playing NS in both cases. I would be very grateful if you would give me your opinions as to whether I have a chance of winning an appeal.