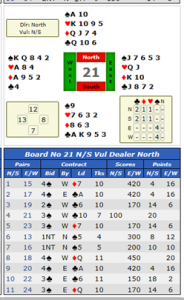 I was Director at a recent session, but am still in training, and would be grateful for your advice on this hand. We were playing duplicate pairs and a two-winner Mitchell movement. This hand was played on the first round at Table 10 by four comparatively inexperienced players. On round 2, sitting at Table 9 the hand came to me next. Our EW opponents were two experienced players including a trained and experienced director.

Looking at the Bridgemates after we had played it, we were all dubious about the result which had been entered at the previous table. Our reaction was that the cards must have got muddled. We agreed to let everything stand and check the hands against the deal file at the end of the session. We subsequently found that the hands were correct and had not been muddled on the first round. The result was allowed to stand, but on later reflection I believe that Clubs instead of Spades had been entered by North at Table 10 on the first round, and this had been missed by East/West (leaving aside for the moment the whole question of whether it really was 11 tricks making rather than, say, 10).

A number of players have difficulty in distinguishing the icons for Spades and clubs (and indeed Spades and Hearts) on the Bridgmates, including myself.

In short, I think the error was a typographical error, but no personal hand records had been kept. When a scoring error is made it affects not only the pair in question, but everyone. In this instance Pair 22 (EW) were disadvantaged, so giving all the other EW pairs a slight boost to their scores. Similarly, NS (Pair 10) gained from the error but this causes the scores of all the other NS pairs to be slightly disadvantaged.

Therefore, my question is that when a “typo” has been made on the bridgemates, can it be corrected later? Do the rules give the director any discretion to correct the icons (suits) entered under any circumstances?

I suppose that if I had been more on the ball I would have:

(b) gone back to those who played hand 21 on the previous (first) table to ask them to re-check the recorded score.