(This example is based on a simulation from an EBL Workshop). 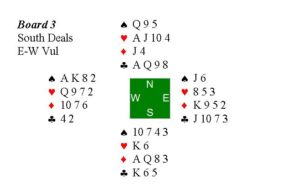 South is declarer in 3NT

West leads a small heart which declarer wins in hand. She continues the suit to dummy’s ♥J. At trick three, declarer says ‘eight’ of clubs, but dummy mis-hears and playes the ‘ace’. East follows and South not noticing dummy’s error plays the ♣K. West follows. Declarer, thinking that she has won the trick in hand, now leads ♣5 (to the fourth trick) and West follows. Declarer now somewhat surprised notices that the ♣A is missing from dummy, and after some table discussion West calls the Director.

The Director asks East what card did declarer request from dummy at the previous trick, and he confirms that declarer did ask for the ‘eight’. West says he wasn’t sure.

Due to the mix-up, and no real harm having been done, the Director rules that for the third trick dummy can change the ♣A for the ♣8 and that play should continue.