(Based On Ruling at Porthcawl Bridge Club) 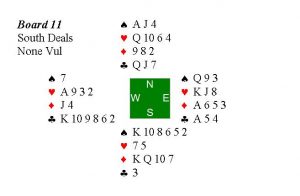 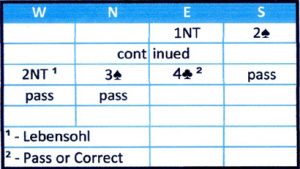 South is the dealer, but East has opened 1NT (weak) out-of-turn. South not noticing the bid, ‘opens’ 2♠.

The Director states that since South has bid, she has automatically accepted East’s opening bid out-of-turn, and that the auction should continue normally. Via a Lebensohl sequence, East becomes declarer in 3♣, duly making ten tricks.

At the end of the hand, North queries the Director’s ruling, stating that East/West seem to have gained through East’s infraction.