(Based on an exercise from the WBU Advanced Training Course) 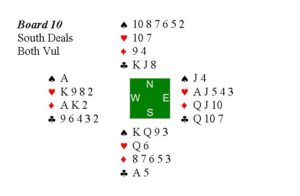 West leads ♦A, ♦K, ♦2. On the third diamond dummy ruffs with the ♠2, East over-ruffs with the ♠J, and declarer plays the ♦6 . East immediately realises that he has revoked and calls the Director.

The Director rules that the revoke is not established, since neither East nor West has played to the next trick (Law 63A1). He tells East that he must substitute a diamond to trick three (Law 62B), and also that the ♠J is a major penalty card (Law 62B1), which must remain faced and played at the first legal opportunity, and there are possible lead constraints on West should he be on lead whilst East still has the penalty card (Law 50D2A). (Declarer can withdraw the ♦6 – but doesn’t)

Having won the trick, declarer now plays ♠10 from dummy, East per-force plays his penalty card, and West wins with ♠A. West now leads ♥2 and defeats the contract.

South is not happy with West’s heart switch, particularly when having looked at the East-West system card realises that they play trump signals [at the first play of the trump suit the value of the card played acts as a McKenney type signal for the remaining suits].

Having been re-called, the Director rules that West has used unauthorised information from East’s ♠J (trump signal for a heart), and that he has chosen from logical alternatives one suggested by the ♠J (he is equally likely to choose a club or another diamond). West tries to object saying that East’s ♠J is not necessarily a trump signal, he may only have a singleton. The Director counters this by saying that South would not open 1NT with two five card suits – West is just ‘trying it on’.

If West leads a club or diamond declarer makes 10 tricks, so the Director adjusts the score accordingly.