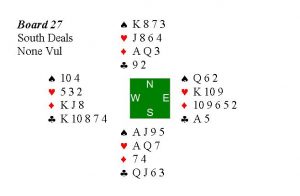 Immediately after opening 1NT, South discovers that she has only 12 cards. The Director is called.

The Director locates the card on the previous table. He looks at the card and replaces it in South’s hand. He reads out Law 14A3 to the table ‘the auction and play continue normally without alteration of any of the calls made, the restored hand being deemed to have contained all of its cards continuously throughout’.

He advises the table to call him back at the end of play.

The auction then proceeds to 4♠, which South duly makes.

On returning to the table, he states that since the original missing card was the ♣6, he didn’t feel that it affected the contract in any way – result stands.