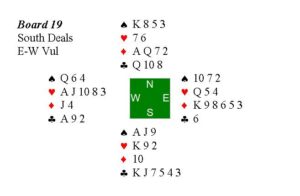 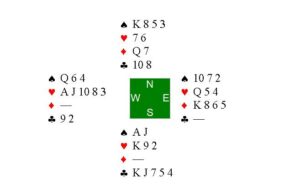 Having lost one trick, declarer assesses that his best chance of making the contract (West is presumed to have started with just two diamonds), is to play for the spades to be 3-3 with the ♠Q on his left. He can then end-play West with the ♠Q. So he plays ♠A, followed by the ♠J, but before West can play to this card, declarer calls for the ♠K from dummy (he doesn’t want West to play the ♠Q on his jack). West realising that declarer intends to play dummy’s king ‘obviously’ plays low (beware Greeks bearing gifts!!). Dummy plays the ♠K (he now has to) and declarer then plays a low spade from dummy achieving his objective of end-playing West.

West then belatedly realises what has happened.

West explains the situation, stating that he was misled into not playing his ♠Q on dummy’s jack. The Director says that West should have thought more about it and voluntarily didn’t play his ♠Q – result stands.