(Based on ruling at Llangollen Congress – 2016, used on Advanced WBU TD Training Course) 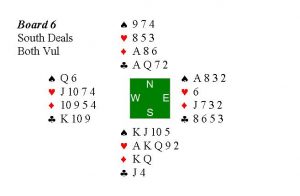 After South has opened 1♥, he becomes declarer in 3NT.

West leads a diamond, which declarer wins in hand. After three rounds of hearts, declarer plays J♣ covered by the King and Ace, and then a spade losing to West’s Queen. West continues a diamond. Another spade from declarer leaves East on lead in the following layout (declarer having won six tricks): 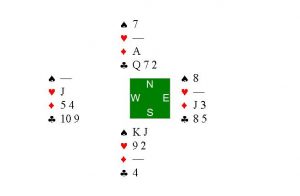 East now plays a diamond, at which point declarer says “I’ll concede a trump trick – claiming the balance”. West now remarks “…but you’re supposed to be in no-trumps”.

The Director determines that South thought he was playing in 4♥. The Director removes the board to assess the outcome.