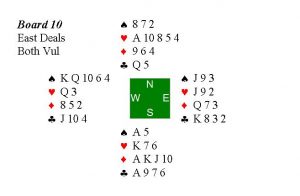 In a local Swiss Teams event (in which a number of sets of identical boards are circulated), this board was the last to be played at table 8 (team 8 NS v team 15 EW). From table 9, North slid the board across the floor towards table 8, and in doing so two cards were displaced from the slots, landing face down. The Director was called, and he determined that North and East were one card short. He looked at the cards, the ♥2 and the ♥4, and asked table 9 as to which hand contained which card – they could’t remember. Hand records were not readily available, so since they were both low-value, even cards, it was probably irrelevent into which of North or East they should be re-located. He placed the ♥4 in North and the ♥2 in East.

After a basic auction of 1 ♦ – 1♥ – 3NT, South duly went off in his contract. At the end of the session, team 15 when scoring, found that their South had made 4♥ for a +12 imp. swing to Team 15 (and hence -12 imps. to team 8). The East/West of team 8 then noticed that when they had played the board at table 15, East held the ♥4 and North held the ♥2. The ‘losing’ team (team 8) approached the Director who stated that it was not the different compass location of the ♥4 and ♥2 which had caused their team’s poor result – it had no bearing on the final contract or play – it was just that North/South at table 8 reached the wrong contract, and that the result should stand.