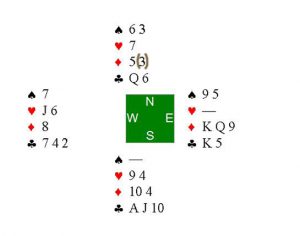 South is declarer in 4♥, and at this stage has lost one trick.

She leads ♦4 from hand, won by East’s ♦9. East now leads ♦Q, South follows, and seeing no diamonds in dummy West ruffs with ♥J, and declarer ‘discards’ a spade from dummy. At this point dummy discovers the ♦3 hidden behind the ♠3. West now calls the Director.

The Director rules that since the ♦3 has been revealed it must now be played to the current trick. Also since dummy had not previously revoked (dummy’s ♦5 was played to the previous trick), there is no further adjustment.

West tells the Director that if he had seen a diamond in dummy he would obviously not have ruffed partner’s winner, and would subsequently also make a trick with his ♥J.

The Director rules that once a card is played it cannot be retracted, and also all the players should have noticed that dummy was a card missing – contact making.