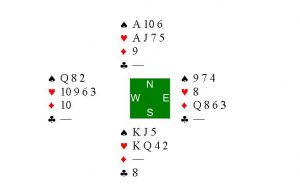 [South is playing in 4♥, and has reached this position requiring all the remaining tricks. With the lead in hand, he assesses that providing the trumps don’t break 4-1, he can draw them, then discard a spade from dummy on the boss club, and then ruff a spade, thereby avoiding a guess on the position of ♠Q

He now plays ♥K, West follows, but East discards a diamond. When declarer then plays ♥Q, again West follows, and East immediately says, “I think I revoked on the previous trick – I’ll correct it and discard my diamond on this trick”. Declarer ignores this comment (dummy also glares at declarer), and draws all the trumps, and now has to guess the ♠Q, but guesses wrong – one off.

Declarer then calls the Director, explaining the situation that East revoked.

The Director now advises declarer that since he didn’t call the Director at the time of the infringement, declarer has forfeited his right to rectification (Law 11A) and that the score stands. North (dummy) now states that he himself would have called the Director but thought that dummy wasn’t allowed to do so. The Director agrees, but states that the result still stands.