(Based On Hand From EBL Workshop) 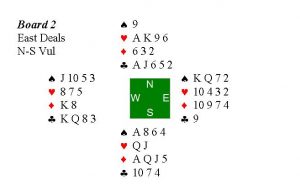 The Director now explains all the usual options to South, and South enquires as to the opposition’s lead style, and is advised that the lead of a Queen shows either QJ10xx, or KQxx (he can’t lead the K since this is the unblock card). After some thought, South says that he doesn’t mind what West leads. The Director clarifies that West can lead whatever he likes, the ♠Q now remains on the table as a penalty card, and there is no UI to West (Law 50E1 – Information derived from a penalty card and the requirements for playing that penalty card are authorized for all players for as long as the penalty card remains on the table).

West now leads his ♠2, East per-force plays his ♠Q. South, unsure as to whether East has four or five spades, and assuming East will continue a spade, decides to duck. East now switches to ♦9, and following declarer’s unsuccesful finesse, West continues a spade. Declarer now loses three spades, a diamond, and a club – one off.