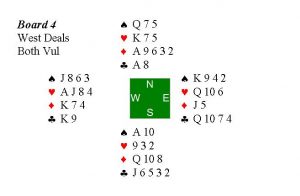 With West the dealer, North has opened the bidding out-of-turn. The Director is called.

The Director advises East that she may accept North’s bid, which she eventually declines. The bid is cancelled, and the auction reverts to West who opens 1♦ (5-card majors, better minor). Having taken North to one side, the Director advises him that he can make any comparable call, in which case the auction proceeds without further penalty (Law 31A2a), otherwise his partner, South, is silent for one round (Law 31A2b). Returning to the table, North knowing that his partner has to pass, bids 2♦, which in their system shows clubs and spades (Ghestem). The Director confirms this is not a comparable call, and repeats to South that he is now silent for one round, and moreover he should not make use of any un-authorised information from the withdrawn call.

The auction proceeds as shown, and North duly plays in 3♦ making 9 tricks.

East/West both complain to the Director on the basis that South has made use of North’s original call, and also that their opponents would never have reached their final contract without North’s infraction.

The Director agrees, cancels South’s 3♦ bid, and awards an adjusted score to West of 2♥ making. He also admonishes South for using unauthorised information.