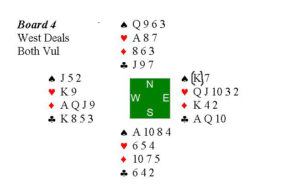 West is declarer in 3NT, and North leads ♠3.

East has laid-out dummy with the ♠K hidden behind the hearts.

North/South then take four spade tricks and the ♥A, but as declarer is running the hearts from dummy, the ♠K is revealed.

The Director rules that whilst dummy can revoke, there is no automatic trick adjustment. All the players should have noticed that dummy was missing a card, and so the most equitable solution is to allow West to make his 3NT, since on the spade lead, it is impossible for declarer not to make a spade trick (small from dummy, and then he’s bound to make either the jack or king).