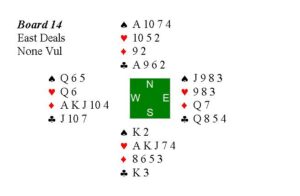 (North/South are an ‘expert’ pair; East/West an average pair).

South is declarer in 4♥, after West has overcalled in diamonds.

West leads his Ace and King of diamonds, and then switches to a club, won by declarer in hand. South then cashes two top trumps (hearts), noticing the fall of West’s Queen, giving the position below: 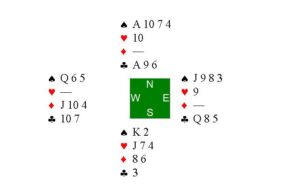 After some thought, East and West agree, and the score is entered.

When they had finished the next board, West suddenly states ‘On the previous board, what if partner under-ruffs your heart – he can escape the squeeze ? (declarer cannot now make all the remaining tricks).’

The Director asks South to repeat his statement, and considers that his claim was sufficiently detailed to allow it. West now states “but he didn’t allow for my partner under-ruffing with the ♥9″. The Director now states that West has a point, and he will consult with other Directors.