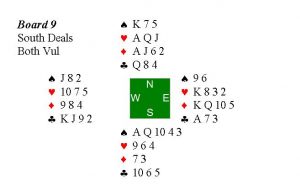 Against South’s 2♠, West leads a small club. East wins, and returns a club to West’s king. West now plays a third club which East ruffs (revoke). He exits with a spade, and declarer takes a losing heart finesse. East exits with a heart. Declarer draws trumps in three rounds, with East discarding a heart and then a club (revealing the previous revoke).

The Director advises the table that since the revoke trick (third club) has been won by the revoker, that trick and one further trick will be transferred to North/South at the end of play. Play continues. 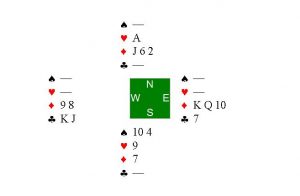 On the play of ♥A, declarer discards his diamond (revoke). He now ruffs a diamond from dummy, plays the last spade, and then cashes the winning ♥9.

East complains that declarer discarded when playing ♥A, and has now played a heart – revoke.

The Director rules that since the second revoke was not won by the revoker (South), one trick is transferred to East/West. Together with the first revoke, this gives a nett transfer of one trick to North/South. Declarer has actually won 9 tricks, so the final result is 9+1 = 10 tricks to declarer.