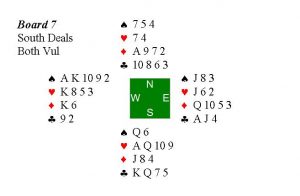 The Director offers North the chance to accept the bid – declined.

He cancels the bid, and explains the various options that West will eventually have. The bidding reverts to the correct player – South now opens 1NT (weak).

Away from the table, West confirms that he does have a comparable call – they are playing pin-point Astro, whereby over 1NT, 2♥ shows a 5/4 major hand – clearly a subset of the original 1♠ bid (Law 23A).

At the table, West now bids 2♥, alerted by East, and the Director now confirms this is a comparable call, and importantly, information derived from the original call is now authorised to East (Law 23B). East now bids 2♠ – passed out. East duly makes nine tricks.

At the end of play, North, who is familiar with pin-point Astro, complains that in a normal auction the bidding would have gone 1NT – 2♥ – pass -pass. The usual system response to pin-point is to bid the cheapest preference with equal length. 2♥ makes 7 or 8 tricks, but the Director re-states that with this being a comparable call, East is allowed to ‘know’ that West has longer spades – result stands.