(based on a ruling at Bridgend Bridge Club. The Director’s ruling has been exaggerated for journalistic effect!!) 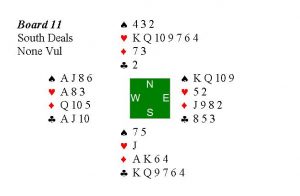 After North bid 2♥ she realises that she should have announced the 1♣ as ‘possibly 2-card’- North/South are playing 5-card majors.

The Director rules that since East has not called, West can retract her 1NT (Law 21) – which she does, substituting a ‘pass’. He advises North that she can bid whatever she wishes, but South cannot make use of any un-authorised information, from either West’s or North’s revised calls. Moreover he states that Law 26 (Call Withdrawn – Lead Restictions) will apply should North/South become defenders (if North chooses a comparable call – no restrictions, but a non-comparable call would impose constraints on South). He confirms that East is allowed to make use of any information from partner’s withdrawn 1NT.

North now chooses to bid 2♥ – very weak (6-card suit, 4-8 pts.), East doubles for take-out, South bids 3♣ and the auction is completed with West bidding 3♠. The Director rules (probably correctly) that North’s replacement very weak 2♥ bid is not comparable with the original 2♥ bid, so if and when South first gets the lead he will apply Law 26B – West, the declarer, can prohibit South from leading any one of clubs, diamonds, or spades. (In the actual play West does not exercise this option when South is first on lead).

So the bidding corrected to: 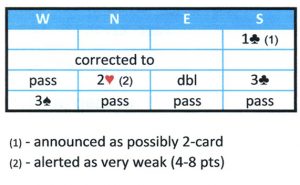